According to European lore, this member of the lily family could set just the right tone for your romantic evening in. In 19th-century France, grooms were given three servings of this natural aphrodisiac before — ahem — moving on to dessert (of the calorie-burning sort). The added ginger will help stimulate the circulatory system.

Long regarded as a symbol of fertility, almonds are high in vitamin E, magnesium, and fiber. But it’s the aroma that makes this dish a sensual feast — the smell of almonds is said to arouse desire and passion in women.

As shapely as a woman, this creamy fruit was once regarded as so obscene in Old World Spain that Catholic priests forbade their parishioners to eat it.

The phallic shape of this potassium-rich fruit makes it an aphrodisiac food acknowledged the world over. According to an Islamic myth, after Adam and Eve succumbed to the apple, they covered their nudity with banana leaves.

The ancient Greeks praised basil for its power to cure headaches, so no more excuses. It also promotes circulation and heats up the body.

As if you need an excuse to eat chocolate, or truffles, this is sure to pack a one-two punch of romance into any occasion. Chocolate is a natural source of serotonin, and truffles are downright sexy.

Frequently used in salads and pastas, this spicy, leafy green has been considered an aphrodisiac since the first century A.D.

Garlic is said to cure the common cold, heart ailments, and bland meals. While some consider this pungent seasoning more of a romance killer, it’s actually an aphrodisiac that can add flavor to your love life.

Figs are said to have been Cleopatra’s favorite fruit. Just the look of a cut fig is enticing!

Oysters are brimming with zinc, which raises sperm and testosterone production, and his libido. They are also high in omega-3, which wards off depression and promotes general well-being. Maybe the saying should be “happy as an oyster!”

Believe it or not, some consider stout beer an aphrodisiac. A man is assuredly responsible for this rumor, but why not give him the benefit of the doubt? Next time you make him some chili, just add Guinness.

To spice things up, pick fiery peppers. They’re chock full of capsaicin, a body-temperature and heart-rate booster that’ll get you hot and bothered in a flash.

Long recognized as a passion kick-starter, this sweetener is packed with fast-acting simple sugars — great for some instant pep anytime, anywhere.

Get in the habit of quaffing vino regularly, and sparks could fly: According to Italian scientists, a daily glass of red can send your lust into overdrive.

Hello, liquid Viagra! Researchers have found that drinking this can lift testosterone levels up to 30% — which makes men and women feel friskier.

Aphrodisiacs, named for Aphrodite, goddess of love, are thought not just to pump up the libido but also to make sex more pleasurable. But forget Spanish fly (made from mashed, dried beetles) and stick with tried-and-true foods and herbs that are delicious, organic, and easily obtainable at the health food store. 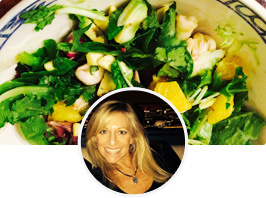 Welcome to my Recipes for Life, Laguna Beach Style

I'm a Laguna Beach mom with a passion for food, fitness and well-being. Here you will find my personal recipes for real food and real life. My posts are created with love and healthy nutrients and sprinkled with a little inspiration to promote good health, longevity and happiness. These are my recipes for life and I'm excited to share them with YOU!